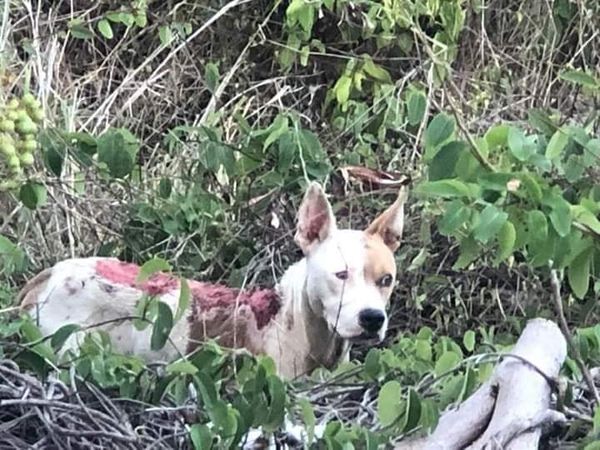 This is the story of Stevie…. You’ll probably want to make a drink and settle in for this one. Not the longest, but definitely the wildest, most nerve wracking of rescue stories to date.

Part 1 of 3: (October 2019) Stevie was found on the North Shore of St. Croix in the US Virgin Islands. She had horrible burns down her back and living alone in the bush where she contracted tetanus. She was picked up and brought in for care where it was determined the burns were from scalding hot oil being poured on her. She was a very tough case. We didn’t know how she would recover and what kind of dog she’d be. She was terrified of everything. She received the medical attention she needed but that was far from her final recovery.

She went into foster to heal physically and emotionally. She moved from foster to foster to keep her afloat as she awaited a home. During that time, someone off island stepped up to adopt her and help her every step of the way once she got there. The challenge then became getting her to her adopter. During the hot months on St. Croix, the bigger dogs are unable to fly on a commerial airliner. We tried so many options and so many times with the adopter sticking it through. We learned Stevie still was not good with other dogs as she learned to trust humans. Luckily, the adopter had dealt with this before and was confident she could be what Stevie needed.

Just about 4 months after we started this journey, we had a very intricate, expensive, thought out plan to finally get her home. And suddenly, the adopter bailed the morning of the flight. Which left us in a very unique situation… what the f**k do we do now??

Money is spent, plans are made, there is nowhere for Stevie here and now nowhere on the receiving end. After discussing and weighing the risks… we made a scary decision to fly her anyway and cross our fingers we figure something out fast. We knew getting her off this island that “burned” her and where she has very limited options, was probably the best.

I believe we did what Stevie would have told us to do if she could. And I believe something, somehow made fate step in and change something last minute because there is a better forever home out there for her.

I immediately asked everyone to just keep sharing and following her story so we could find that home once she landed and settled.

As Stevie was in the air headed to North Carolina we went to work on a new plan for her. This next part of her story landed her with @Claire Grace. A lovely foster mom who helped Stevie continue to learn and trust. She was doing very well there, unfortunately at the new year, Claire’s job would put her on the road and she was unable to continue fostering Stevie, we still had no good adoption options.

I revisited an old message from a woman who reached out about her Grandson wanting to adopt Stevie. After Claire and I both spoke several times with the family we felt it was a good fit. The boys grew up helping in rescues alongside their Mother. The young man was in need of a companion as much as Stevie was and would be able to devote all of his time to her.

The home was in Maine, so I started a transport plan to get this sweet girl up to her home. Through the help of many kind people, Stevie was on her way to Maine just in time for Christmas with her new family.

She and the young man became instantly attached and inseparable. She loved to sit atop snow drifts in her sweater, they would go sit as many times as she wanted every day. After a couple of months, Stevie was in a situation with her owner in her home where she felt she had to protect him and bit someone.

I received that phone call and my heart sank. The person filed charges and Stevie was seized by animal control to be put down. The young man was beside himself. I spoke to all the family members and had so many different emotions running. This poor dog was now in the worst position yet and now further away than ever.

I got on the phone with the Maine Animal Control Department who had custody of her. In a very lucky turn, the man in charge was a huge dog lover. He said they saw no behavior issues with her since they took her, he said he had no interest in putting her down and said if I could figure out a solution he would hold onto her.

SO began the next chapter of Stevie’s journey…

Now back in ultra panic mode with very few contacts in Maine, I began to rack my brain. I had only a few days to help Stevie after her hold was up.

I remembered one of her transport drivers had quickly formed a special bond with her. Everyone who met her fell in love, but there was just something about this one. Enter Haley Goudreau. She was in North Carolina. She said she could temporarily take Stevie in but would be moving/traveling a bit more coming up so it would not be a good time to adopt.

I looked into some other options that would not require transporting this poor dog all the way BACK to North Carolina. Nothing worked out in the short time we had. SO, we began planning a way to get her back down. Caryn Madison, an amazing supporter who had followed her story said, “this dog has been through enough”, she would drive the entire trip form NC to Maine and back to get her to Haley. Incredible.

Stevie was reunited with Haley. After she had some time to decompress and work with Haley, we resumed the search for the right home. No more mistakes could be made, no more moves.

We finally got very close to an adoption and set up some reference/vet checks… Haley was going to do those over the weekend. Come Monday I got the message, Haley couldn’t do it. She said she couldn’t stand the thought of uprooting her again and she knew that Stevie was meant to be her forever girl.

In all the awful twists and turns, Stevie landed right where she was meant to. That is one happy, proud face on that beautiful little soul.