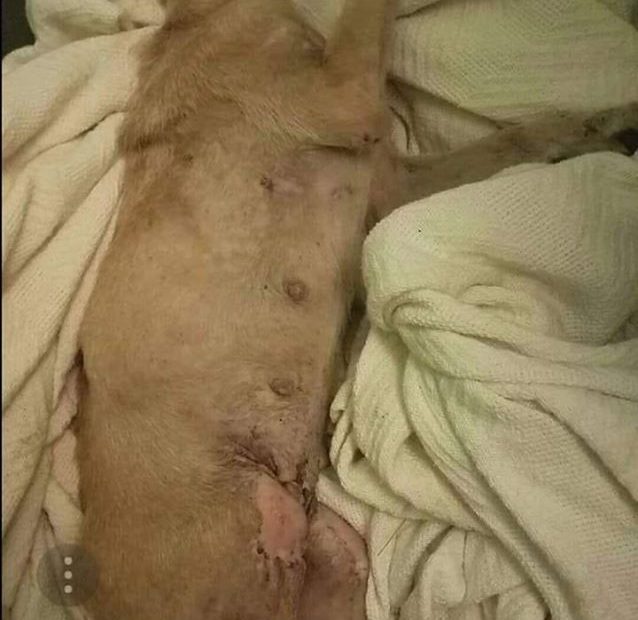 I found Laila shortly after the hurricane. Pulled off on a side road of the highway to stop and make a call. Pulled way down away from road and got out of the car. On the other side of brush pile I saw a little broken body.  Laila, a small chihuahua mix was laying on the ground emaciated and unable to move. She was next to the skeleton of another animal likely dumped. One of her back legs was broken in half and rotted. She could not use back end at all. When I got near her she flipped out. I had nothing in the car so I drove the rest of the way to Frederiksted to find a blanket, crate, anything I could use to get her.

I returned to the same spot and much to my surprise, she was gone. This little injured, weak animal. I looked all over the forest until it started to get dark. I walked back to my car feeling awful leaving her. When I turned around the front of my car, there she was, sitting by the driver side door, ready to go.

I brought her home thinking she would pass in the night she was so weak. She was a fighter though and had made it on her own this long, she wasn’t giving up. In the morning I brought her to Sugar Mill Clinic. I shared her story that same night and received a generous outpouring of messages from people on St. Croix, and others from far away, all wanting to help or donate if she had a shot.

Still skeptical when we arrived, we went ahead with xrays and the evaluation. At that time it was determined she had likely been hit by a car, also shot with several pellets, and dumped.  After discussing with Dr. Stacia Jung, we decided to move forward with trying to save her. Her injuries and the placement led the doctor to believe that with an amputation and LOTS of work and treatment, she would survive and walk again.

A woman in Virginia, Becky, was her main supporter right away and sponsored the surgery and care. After a couple months of healing, Laila flew to Virginia and was adopted by her saviors!