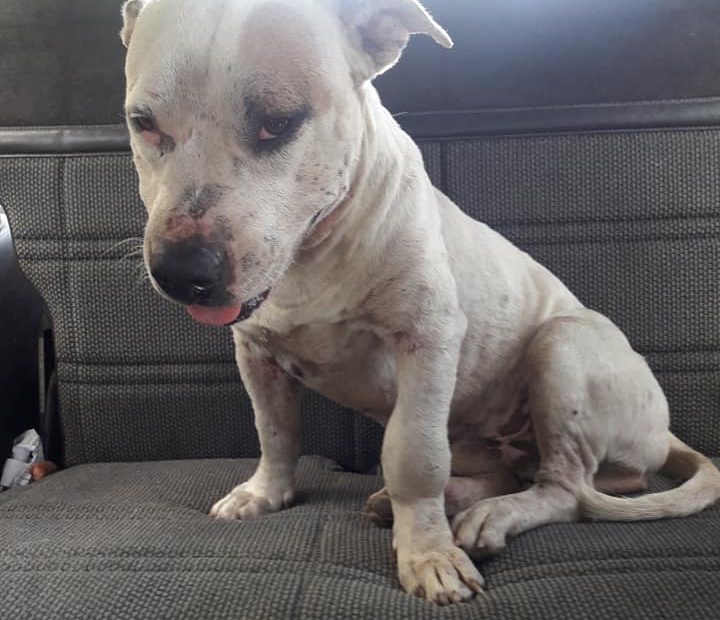 Hazard was one of the first dogs I met at Concordia Dump.

The guys who manage that dump deemed him “The Boss”.  He managed the dog side of things lol. At first we thought he was a bit aggressive with food and towards people. But over the months I spent there he warmed up and actually became my partner in helping me catch the others. They followed his lead and since he trusted me, they would too.

He was doing pretty well there and not in as bad of shape as some others, so he stayed there. With my plan to bring him in last. One day I noticed he seemed a little off, just sadder and slower. He still ate and moved around and was happy to see me so he stayed and I took others.

On my next visit I walked the normal path over the hill and saw him laying down and when he looked up at me I picked him right up and put him in the car. It was his time to go and we both knew it. He didn’t resist at all.

I took him in to be neutered with the plan of returning him to the dump. He was not considered a highly adoptable dog and there was no room for him.  The next day I received a call that while in surgery, a bullet was found in his leg. He had been shot and the wound healed over with bullet remaining inside next to his broken bone. The injury was causing major infection and that was the cause of his declining health.  He would not survive back out on his own, as he needed daily meds several times a day and rest.

I made a desperate plea, not counting on anything coming through. He was a little but older, scarred up from fights, and still very sick.  Alas, an angel came out of the shadows and brought the light! A woman messaged me saying she couldn’t stand the thought of that little dog alone. She offered to take him after surgery and keep him at least through recovery.  It took only a couple days before she and her husband fell in love with him and decided to make him a permanent fixture in their home.

The Boss was finally retired 😊