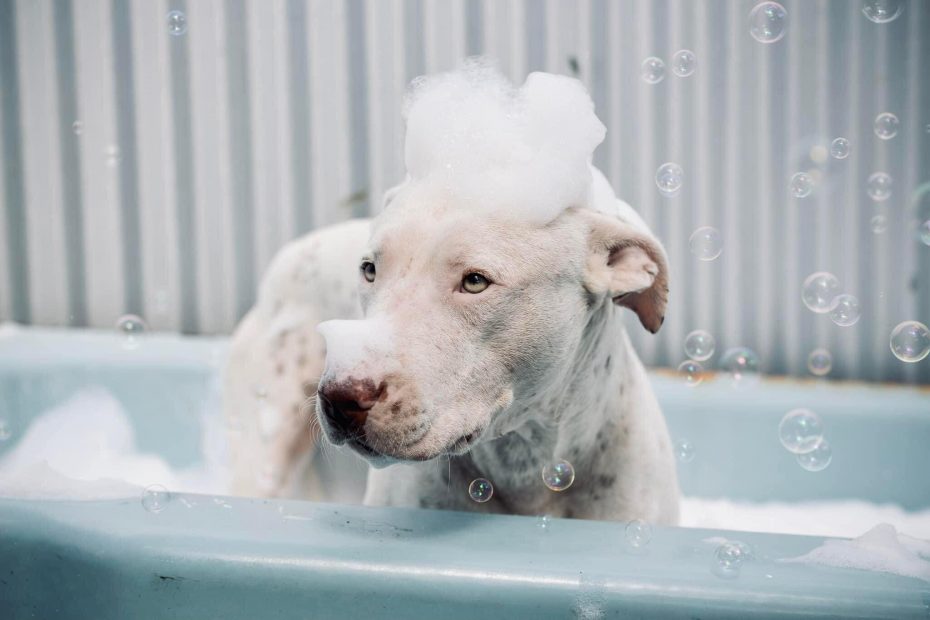 This precious bubble boy is looking for his forever home. We don’t know his entire story but his eyes and fresh bites all over his face were begging to be relieved of the sad life he was living at the end of that chain.

Bubbles has been learning what it’s like to be free and loved these past few months and is the most gentle giant. He has the most beautiful, soulful eyes and loves his foster brother aka his pillow/cuddle buddy so so much. He has made so much progress and now it’s time for him to get comfortable with his very own family. He gets along with humans and other dogs…cats not so much. He loves cuddles, running at the beach, playing with his toys, holding hands, and snoozing. He is around 3 years old, neutered, and heartworm negative.

A.C.E.
In January-February 2022, I received a Crime Stoppers tip in regards to possible dog fighting in the bushes surrounding the John F Kennedy Housing Community, the tipster stated hearing dogs barking, people shouting (instigating shouts to fight) music, dogs growling and then cries of dogs and whimpering. These activities were conducted on or around X-mas day, New Years’, and Three Kings day (all holiday weekends). Based on that information I gathered several Federal Agents and we searched the bushes for evidence of dog fighting. That’s when I first saw this white dog that was scared of himself. Any human movement would scare him and pee on the spot. He was tied inside a large area surrounded by wooden pallets. There were two other dogs close by also scared. The white dog (Bubbles) had the markings of being a possible bait dog, bites on his face, neck and legs. At the time I was unable to seize him and all the other dogs in the bushes, why? Where would they go?
I took photos of each dog and posted them on Facebook, hoping that one of these dogs was owned and missing. When I went to the location for a second time (Bubbles) had fresh bite marks. That’s when I decided to move him from that horrible area. JFK bushes are known for tying dogs and left to die (I have the photos to prove it) Bubbles was rescued and taken to a special place where he is loved.

Foster Parent
Bubbles came to stay in my backyard for “a couple days” back in February in an emergency situation. He was terrified; his face and legs were full of bites and scars, and a ring around his neck from the rope that had tied him up. I made a bed in the laundry room but he was too scared to go inside. He just stood outside in the rain. It’s all he knew.

The following day I introduced him to my dog and within 10 min they were running and playing in the yard. I gave him a bath and it started raining again and my dog went in the laundry room, showing Bubbles it was ok. That’s where he slept for 1 night.

It continued to rain for the next day and that’s about how long it took for this pup to make his way into my home, my bed, and my heart, and he has been an inside dog ever since. He enjoys cuddles, belly rubs, going on hikes, running on the beach, and swimming in the sea. He loves to be close by wherever I am.

He is EXTREMELY cat aggressive so he can not be around small animals. However, he is timid and backs down to other dogs… especially mine.

Please consider giving this dog the life and love he deserves.